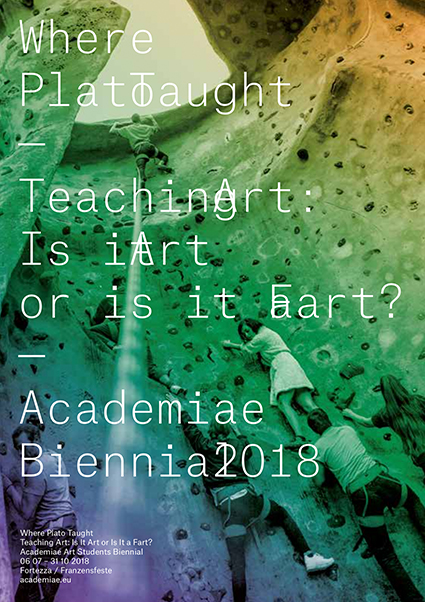 This summer, young artists from international academies, including students of the ABK Stuttgart*, show their works in the fortress of Franzensfeste. The second edition of the Academiae Biennial will be opened under the title "Where Plato Taught. Teaching Art: Is it Art or is it a Fart?". on Friday, 6 July at 7 pm. From 5 p.m. there will be a preview for the media.

The central fortress of Franzensfeste, this high plateau, which can only be reached via a staircase or an elevator, resembles a busy beehive these days: the aim is to create a collective exhibition of the most diverse artistic approaches and to find a common form of presentation for the many performative art actions. The presence of the many international students, some of whom also live in tents on site, turns the otherwise quiet, bucolic place with its mysterious niches and hidden corners into a vibrant art site, a multilingual Babel of contemporary art.

On Friday evening the exhibition "Where Plato Taught – Teaching Art: Is it Art or is it a Fart?" will be officially opened. It is the second edition of the biennial initiative of ArtintheAlps with students from international art schools.

For the curator Christian Jankowski, himself a renowned artist and professor at the Stuttgart Academy of Art, the starting point for the concept was initially the location of the Franzensfeste, which he declared, in reference to Plato's teaching site, an autonomous, creative space of thought outside of Athens. In addition, the curator Jankowski's own working and teaching practice as well as curating as an artistic practice were also reasons for his exhibition concept. He set an example and reexamined the questions that may have also played a role for Plato in the founding of his academy: How can art be taught? How can teaching and one's own art practice be combined? Which teachers do students need today? How does the environment of an academy affect art production?

In order to find answers to these and other questions on the topics of participation, exchange and mediation in the context of artistic education, 15 classes of international art academies are invited for this second edition of the Biennial. The countries represented are Portugal, the Netherlands, Switzerland, England, Norway, Sweden, Poland, Czech Republic, Russia, Austria, Germany, France, Italy, Turkey and Israel. Each university is represented by a professor, each of whom is an acknowledged artistic personality, who in turn has selected a group of students from their class to participate.

An essential aspect of the concept is the role of the teacher among his students. Jankowski himself turned down a selection and brought his entire class with him. Also in Holland Professor Jerszy Seymour retires behind his class. Valentin Carron, professor at the renowned ECAL in Lausanne, has decided to come alone and teach his students a lesson in what he calls "opportunism and cowardice". A carpet from the Turkish art school Mimar Sinan, on which several generations of students have woven, again provides an impressive symbol for the theme of collective and cooperation.

What is striking about many of the works and installations on display is their focus on performance. There is hardly a project that cannot be traced back to an action. For example, the Polish delegation of Miroslaw Balka's class developed a project with a local scout group. Also spectacular was the journey of Bangjoo Kim from Germany, who dribbled the long way with a basketball to finally score a basket at the Franzensfeste. Because the event character of the works is so great, media such as video play an important role, as they allow the ephemeral events to become museum-like. The Dutch Dirty Art Department/Sandberg Institute Amsterdam, for example, brought along a film from their recent trip through Greece, the political crisis of which was explored by the local students.

The tour of the exhibition provides the encouraging image of a young generation facing political reality and everyday nonsense with ingenuity and a self-evident internationalism.

The opening begins at 6 pm with a series of artistic interventions. The opening speeches will be followed by the jazz concert of the group Megalodon Collective as part of the South Tyrol Jazz Festival Alto Adige at 9 pm.

A comprehensive exhibition catalogue will also be presented at the opening, which further explores the issues of artistic education and the role of art academies. It can be purchased in the Franzensfeste for 15 euros.

The exhibition is open daily except Mondays until the end of October 2018.
The entrance fee is 7 € (reduced 5 €, family ticket 12 €).
www.academiae.it